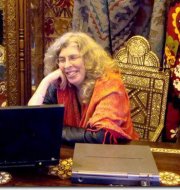 My survey courses have been growing since I arrived in Chapel Hill in the fall of 1993.  I began with about 60 students, asked to teach a survey of “Islamic Civilization.”  I defined it as Gibralter to Jakarta, sixth century to the present in two semesters.  For a University of Chicago Ph.D. with a very narrow focus on the economic history of the late Ottoman Empire, this was a bit of a challenge.

After a few fascinating years studying western Africa, Indonesia, medieval history, and Islamic Spain, I gave up the broad global Muslim civilization surveys, replacing them with the Modern Middle East.  By this time, the courses had grown to more than 150 students.  I struggled with the whole project of survey courses.  As a Princeton undergraduate, my large lecture courses had been more thematic (Comparative Revolutions, Vienna at the Turn of the Century), offering specific focus around which big questions could revolve.

What would it mean to teach “Islamic Civilization to 1500” or the “Modern Middle East” in one semester?  How was one to focus?  Which things were important?  And how could we teach students about what history really is–what historians really do–if we tell them stories instead of forcing them to analyze the past?

And if we want our students to learn to think critically, what would the role of the lecturer be?

During a leave last year to work on the next book project, I began serious musings about how I might teach the 200+ students who would be enrolling in my next large survey course.  I wanted to find approaches that would make them think historically, engage them in the project of choosing how to narrate the past (and to realize what was at stake in those choices), and demand that they become active participants in analyzing the role of context and the process of change over time.

As I began the semester and continued these reflections, I decided to share the journey.  I hope to hear from readers, to discuss the challenges and opportunities offered by a traditional classroom format at a time when the need for an educated and critically-engaged citizenry have never been higher.  I look forward to your comments and suggestions.

For more on my other work, please see my web pages http://sarahshields.org/ and http://history.unc.edu/people/faculty/shields.html

2 thoughts on “About This Project”