I introduced the students to DAM, the Palestinian hip-hop group, as they entered today.

I began where we had ended on Thursday: the consequences of Operation Desert Storm on Iraqis.  This, too, ended up being a fairly traditional lecture.

First up, the debate over the sanctions that devastated Iraq, the twelve years that resulted in fatally degraded infrastructure that the (apparently uninformed) media referred to it in 2003 as “neglect.”   The destruction of Iraq’s infrastructure that made uncontaminated water difficult to come by, combined with the sanctions that prohibited the importation of spare parts and medications, had both immediate and long-term consequences, resulting in an estimated half million children dying from easily preventable diseases.  The Clinton administration decided that, somehow, the weekly US-UK bombings and the public health nightmare were “worth it.”

The students had seen the graph showing declining child mortality under the Ba’ath government.  Now I showed them a graph on the nutritional results of sanctions.

I emphasized two regional consequences of Operation Desert Shield/Storm and the sanctions.  One, of course, was Osama bin Laden’s offer to protect the Saudi state and his fury at the King’s request for US protection instead.  The resulting US bases in the kingdom remained a mobilizing point for Islamist groups.

Second, partly as a result of a promise made to coalition allies, the US initiated negotiations over the territories Israel had been occupying since 1967.  Although the resulting Madrid Conference did not produce an agreement, back-channel talks continued in Oslo.  The resulting Declaration of Principles (aka Oslo Accords) was signed on the White House lawn in September 1993.

The Declaration of Principles provided for mutual recognition, Israeli withdrawal from Jericho and Gaza, and a Palestinian authority with limited (largely municipal) powers. At the same time, it divided the West Bank into many small and mutually exclusive enclaves, some under Palestinian control, others under Israeli control.  It did not create a Palestinian state or deal with the central issues of refugees, water, or Jerusalem. 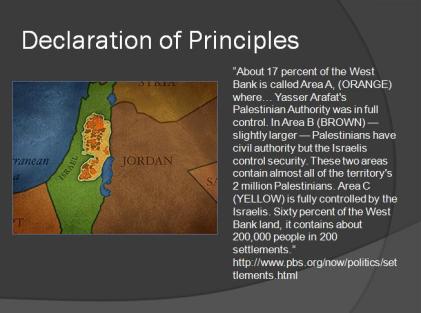 This was an opportunity to remind the students about the range of existing opinions.  There was anger from the edges among both Palestinians and Israelis.  While most seemed to support a “land for peace” agreement, right-wing Israelis worked to make agreement impossible.  Baruch Goldstein opened fire in a  mosque during prayers five months after the signature on the White House lawn, and an assassin killed Israeli Prime Minister Yitzhak Rabin months later.  At the same time, Hamas suicide bombings increased.  Focusing on one set of violent acts to the exclusion of the other makes the bigger pattern invisible.

I ended by trying to tie together recent issues in the region–through Saudi Arabia.  I asked the students to think about the challenges that a patriarchal monarchy would face during the turbulent second half of the twentieth century.  So many choices, each containing contradictions!  How could an old-style oligarchy neutralize Nasserist-type nationalism? How could this government navigate the connected and apparently irreconcilable choices posed by the alliance with the US in the Cold War and US support for Israel?  Where could the Saudi ruling family come down on the use of oil revenue and the potential dangers of “development” for the regime’s survival?  When confronted with global rhetoric about democracy and human rights, what was a Saudi king to do?  War in Yemen, the 1979 take-over of the shrines, support for Operation Desert Storm, exiling Osama bin Laden, and the 2002 Saudi Peace Plan illustrated the tight-rope.