For some reason, recent history seems much harder for me to synthesize.  What are the biggest issues of the 1970s and 1980s?  How can one present them to beginning students who don’t know much about the region, without eliciting significantly more controversy than analysis.  By the time we get to the 1970s and beyond, students already have fixed ideas and a stake in the narration.

Instead of doing an overview of the 1970s and 80s, I decided today to focus on two secular autocracies and try to connect them to the big issues of the era.  I realized they hadn’t hear Fairuz yet, a serious deficiency on my part, so they arrived to her singing one of the songs my Damascus women friends seemed to consider almost an anthem.

The “quiz” today was the same one that Viji gave her students a few weeks ago, and their responses were similar.  I told the students about the experiment she had done in class, and how thinking about issues at a deeper level would help students learn.  I explained that when I asked them to respond to a poll, I had hoped to encourage the kind of engagement that would help them participate more actively in the kinds of analysis historians do, but now it seems I may have been (inadvertently) helping them learn and remember the issues we were talking about.

I began by reviewing the importance of the past in understanding the violence in Lebanon in the 1970s, talked briefly about the Sabra and Shatilla massacres, the Israeli occupation of the south, the Syrian occupation of much of the rest, and the bombing of the US marines barracks in Beirut, for which a memorial exists down the road at Camp Lejeune in North Carolina.

Then I asked the students to think about all they had learned so far about the region.  Based on that, what kinds of challenges faced Egypt and Iraq in the 1970s?  Here are their Poll Everywhere responses, appropriate and complex, as a word cloud: 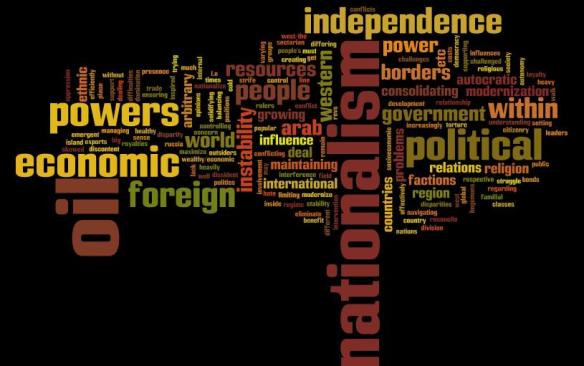 I began with Sadat’s Egypt, the high costs entailed in being neither at war nor at peace, and the 1973 war that managed to solve none of those problems.  Neither did the “opening” to capitalist investment.  I described Sadat’s dramatic visit to Jerusalem in 1977, the result of food riots that followed the imposition of IMF austerity measures.  (In past years I have had to describe the demands for austerity measures, but the students seem to know lots about them these days.)  I introduced the Muslim Brotherhood as both an economic and a political force, and ended with the assassination of Sadat.  (They now know the names of all of the Egyptian presidents since 1952!)

Then on to Saddam Hussein’s Iraq.  Context comes first: the Cold War, and the various ideological options available to people in the 1970s Middle East: communism, state

nationalism, Arab nationalism, Islamism.  The Ba’ath party made sense in this context. The rising price of oil we had already talked about (and they seem to have talked to their parents about) provided the emerging Iraqi dictator with a lot of income to spread around.  I talked about rapidly improving child mortality rates under his rule, and the sorts of improvements that would have been reflected in the improving health of children.  But I also showed them a series of images reflecting the growing cult of personality, and concluded with the 1980 invasion of Iran, trying to provide the background they would need for the week’s reading, Sinan Antoon’s I’jaam: An Iraqi Rhapsody.  The Iraqi invasion of Iran, I pointed out, brought together most of the issues we had focused on since the end of World War I: disputes over borders, questions of belonging, Nasserism and nationalism, and fear of popular revolution.

Their questions will provide a transition to Thursday: