The decade that followed the creation of the state of Israel saw the overthrow of most of the rulers of the Arab states.  It’s a challenge to “cover” all of the revolutionary movements, let alone their consequences.  I have been struggling with my desire to talk about all of the big events of the decade, trying to figure out which things I should focus on.  Those would have to stand in for the issues raised by all of them.

Who better to begin with than Um Khulthoum, though I’m not sure the students understood from the video clip why she has been so beloved by so many for so long.  Review today: the partition of 1947, Israel’s establishment, and the hundreds of thousands of refugees that resulted.

I’d found a wonderful Guardian newsclip on the overthrow of the monarchy in 1958 Iraq, and asked the students to watch it and prepare to respond to four questions: What happened? Why? So what? What other information would you need to know to answer these questions?  Then the film: 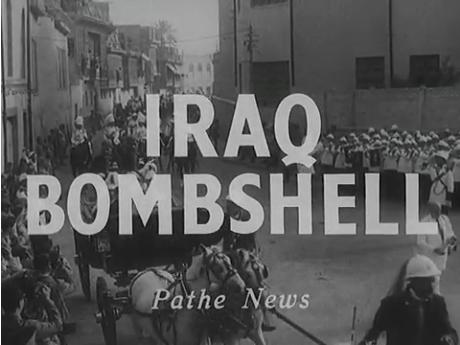 They began to respond, and quickly got bogged down.  After I played the clip again, they were able to answer the questions, while the TA typed their responses.  Although I’m not convinced the responses are below the right questions, it seemed (I hoped?) that the exercise was helpful not only to make the list, but also to think about HOW one prepares for–and works to understand–historical information.

Clearly, Nasser was not only a huge and frightening spectre for the British newscaster.  He was also a really significant symbol for those who have come after him and used his legacy to seek change .  I wanted the students to think about Nasser and how he could have come to be so popular.  They are reading one of his speeches this week.  I asked them to think about everything they know about Egypt to this point, and began a timeline on a PowerPoint slide.  They were quite impressive, remembering not only the events, but also some of the big issues.  We had left Egypt after the Urabi revolt, so I caught them up to 1948: the frustrated efforts for independence after World War I and the dependent independence that followed, with British continuing to control most aspects of Egypt’s government and economy.  I hope by the end of the semester to convince them that context matters, in this case, that Nasser and his legacy can only be understood within the contexts of Egypt’s history, the struggle against colonialism, and the Cold War.